In continuation of my half-eaten food theme from last week,  I wanted to post the rest of the pictures from our very fun Purim potluck dinner. I don’t have recipes for these yummy foods but have included links to recipes that are similar. Above is the “half-eaten” Beets & Blood Red Orange Salad. I found a similar recipe on a cool cooking blog called Missenplace.us. Thanks Margretta Murnane for sharing. My favorite thing about this salad, other than the amazing blood red oranges, which have been a fav of mine since I first discovered them at WholeFoods last year, is the golden beets. Who knew beets came in any color other than red? Not me, and I was thrilled to be let in on this little secret. This salad is amazing and so fresh and healthy. 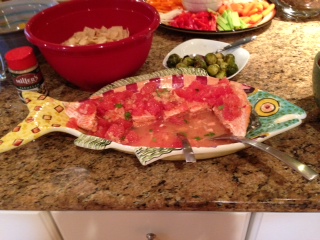 Next is a … you guessed it … half-eaten Salmon with Grapefruit. I would never think of pairing salmon with grapefruit but am glad I got the chance to experience this really unique dish. I found a similar recipe on the Martha Stewart site, although her recipe is called “spicy grapefruit relish,” and the version served at our Purim dinner was not spicy, but I think the pepper flakes could be eliminated or lessened.

Last but not least is a half-eaten Rainbow multi-layer cake with a cream-cheese like frosting and sprinkles. Both kids and adults were lined up with plates in hand to get a piece of this beautiful and tasty cake. I found a similar cake on the Betty Crocker site called Rainbow Layer Cake. According to the very talented lady who baked this creation, there was freezing of layers involved to make it easier to frost and as part of these steps, the red layer did not survive. But I promise we didn’t miss it one bit. We were even eating the crumbs left on the serving plate as we were walking out the door. Probably not for the faint of heart but if you’ve got some extra time … and lots of patience, give it a try.