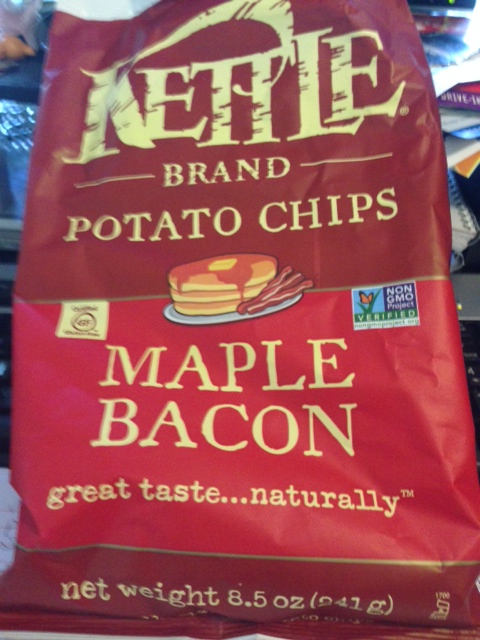 My hubbie is on a mission now any time he goes to the store. He’s looking for funny, Kosher Treif food to bring home and test. This week he discovered Maple Bacon flavored chips from Kettle. This follows his last discovery of Baby Back Ribs chips and prime steak chips.

The above picture depicts the state my kitchen has been in for the past 5 weeks.

The above picture depicts just a tiny sliver of my dining room, which has now become a makeshift kitchen. The large piece of furniture hiding underneath the food, clock and ziplock bags is a piano. Good thing my daughter decided against continuing her piano lessons for now.

Said kitchen has been in need of a serious remodel for many years so a few weeks of living like a gypsy shouldn’t bother me too much, but I’m just around the corner from being really annoyed. We’ve eaten takeout and sandwiches for just about as long as I can stand, so I decided to try-out this “clean eating” initiative I’ve been hearing so much about lately.

I did a Google search for clean eating and clean food and found many great recipes, including a free download from Eating Well. On Monday night, I decided to skip the fast food and prepare a home cooked meal … without a kitchen. I chose the Sweet Potato Macaroni & Cheese recipe because it seemed easy enough (the microwave was involved) and required few dishes (I’m currently washing my dishes on my front lawn … the neighbors are so proud).

To kick things off, I killed the sweet potato in the microwave. The recipe said to cook it for 7 to 10 minutes. I cooked it for 7 and what came out looked like an old leather shoe. There wasn’t even anything close to a potato left inside the skin. Yuck.

By this point, I already had the noodles and the cheese sauce cooking (on a griddle lying on my floor) so I didn’t want to throw it all out, but I also didn’t want to buy or attempt cooking another sweet potato. 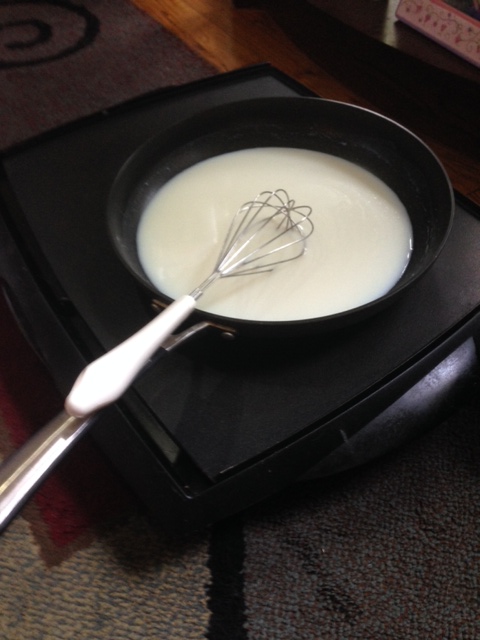 My husband was at the drugstore picking up a prescription so I texted him to bring me home a few jars of sweet potato baby food. And no, it wasn’t as easy as all that. He texted back WTF? And I texted back “just do it.” And then there was more texting about which brand, etc., and even more discussion about the strange conversation he had with the check-out lady.

I finally got the baby food and added it to the cheese mixture, heated everything up (still working from the floor), transferred it all to a disposable pan and broiled it all for a few minutes to brown the breadcrumbs on top. And TaDah: Clean food (sort of) baked on the floor without a kitchen!

I have to say, it wasn’t half bad. My hubbie even agreed and so did my daughter until she decided, after eating an entire bowl, that she didn’t like it. Here’s a few notes about my version, some of which make the recipe somewhat unclean:

Overall, it was a fun experiment and there weren’t many pots/pans/dishes to wash on the lawn afterwards. A win for everyone concerned I’m sure.

Tell me about some weird extremes you’ve taken to cook food during a remodel? I’d love to get some tips and tricks.