Many years ago, I went to work for a company that was in process of relocating from New York City to Dallas. They temporarily moved me and a coworker (who I didn’t meet until we were at the airport) to train in NY for several weeks. We had the opportunity to work in the city and explore like tourists after work. We had a blast. We lived in a great apartment at 53rd & 7th. There was a Ray’s Pizza on the 1st floor of our building that seemed to stay open all night – and we didn’t mind one bit. This was long before my Kosher-keeping days.

One evening, a NY coworker offered to cook us dinner. He banged around in our kitchen for a while and finally came out with the most unbelievable food. It was my first experience with Chicken Cordon Bleu and I was in love. It was the most juicy, yummy chicken (and ham and cheese) I’d ever tasted. Said coworker later taught me how to make this amazing chicken and I prepared that dish several times later before starting to keep Kosher. Of all the foods I miss now, Chicken Cordon Bleu has to be at the top of my list.

I’ve been thinking about recreating Chicken Cordon Bleu in a kosher form for some time now and finally got around to trying it for Friday night dinner this past week. When I did a Google search, I found a kosher version on the Joy of Kosher site by Ahuva Staum but she used a mayonnaise based dressing as a substitute for the cheese. I wasn’t ready to give up on the cheese part of this dish so I found a regular recipe for Chicken Cordon Bleu on Allrecipes.com and combined the two. Here’s how it went: 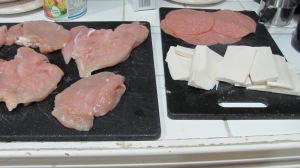 So freaky to see chicken, salami and cheese all together when prepping a Kosher Dish! OK, the cheese is fake : )

Overall, it was not a bad first attempt at making Kosher Chicken Cordon Bleu. The cheese inside the chicken breasts did not melt so that yummy, oozing cheese/salami mixture was definitely missing. And the breading was not as crispy as I remember from my Treif days. I’m wondering if frying would have taken care of both of those problems.

I’m thinking for the next round, I might use the same cheese, which has a nice taste by the way, and also add the mayonnaise mixture that Ahuva Staum suggested. Also, the original Chicken Cordon Bleu recipe calls for Swiss cheese and I couldn’t find a mock Swiss cheese at Wholefoods but I love Mozzarella so went with that.

Have any of you attempted Kosher Chicken Cordon Bleu? If so, please share how you made it.